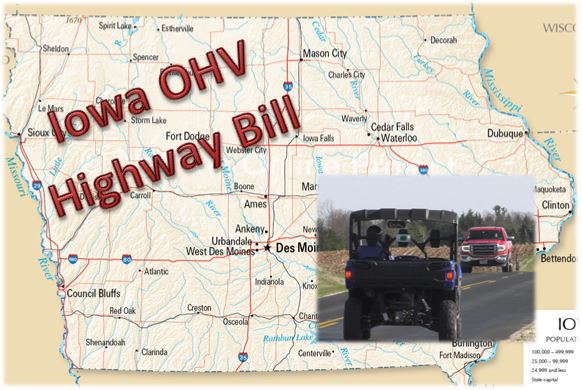 SCROLL DOWN TO DOWNLOAD SURVEY & EMAIL BACK TO recmotorshop@netins.net

WHAT IS THE IOWA OHV HIGHWAY BILL (IOHVB)

There are 99 Counties in Iowa, 63 of those counties have ordinances allowing DNR registered ATVs and UTVs to ride on the County roads and most incorporated towns allow some form of travel within the city limits.

Many of these towns have State highways running directly through the town, and because it is a State highway it limits key areas of travel for ATV and UTV vehicles, this also limits the ability of some retail businesses to capitalize on potential income.

A group of dedicated ATV and UTV riders from 5 different counties in eastern Iowa along with the help of Iowa House District 58 Representative Andy Mckean have taken on the task of gathering data about the demographics of ATV and UTV riders and the boost in Tourism dollars that rural communities could see from allowing them to ride on State highways (excluding 4 lanes and express 2 lanes).

The current bill that is being proposed (which is still in the early draft stages) would require the purchase of a License Plate through the DOT to ride on State Highways (excluding 4 lanes and express 2 lanes).

We are in the process of getting surveys out to ATV and UTV riders via clubs and Powersports dealerships to help us gain more insight as to what the is needed in the Bill.

If you would like a survey emailed to you to fill out and return please feel free to call 319-462-6932 or email us at recmotorshop@netins.net.

IN ORDER TO GET THE BILL DRAFTED AND READY FOR THE NEXT SESSION PLEASE HAVE ALL SURVEYS RETURNED BY OCTOBER 1ST, 2020

We will keep this page updated with the progress of the Iowa OHV HIGHWAY BILL as it develops.

9/14/20 UPDATE: Iowa OHV Highway Bill, we have gotten a good response so far with surveys. We could still use some input from all counties especially West of Interstate 35 and South of Interstate 80 in Eastern Iowa. 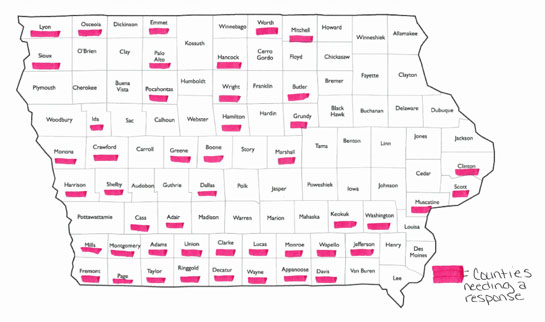 9/29/20 UPDATE: We have 1488 surveys completed from 77 counties. There is an easier online version now available. If you would like one sent to you please email recmotorshop@netins.net or visit our Facebook page for a link. Below are the counties we no response as of 9/29/20 am. 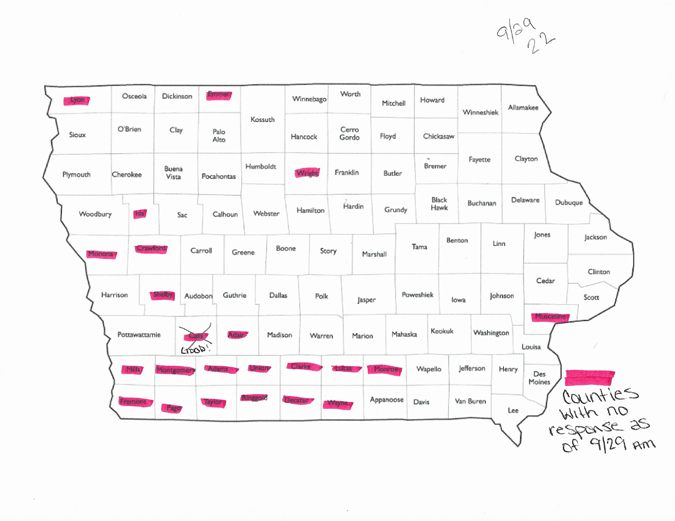 9/30/20 UPDATE: We have had a great response in the last 24 hours. We have surpassed 2000 surveys from 90 counties and surrounding states. Due to this response we are going to keep the survey open through this coming weekend. We are also hoping to get responses from the following counties if possible:
Lyon
Emmet
Ida
Monona
Crawford
Montgomery
Page
Ringgold
Lucas
10/7/20 UPDATE: We closed collecting the surveys with 4,611 completed from ALL 99 counties! The next step is drafting the bill. We will update with that as soon as we can. Thank you for all your input.
10/14/20 UPDATE: A group of individuals met with Iowa House Representative Andy McKean last night and presented the information collected. Representative McKean is working with other legislators and the bill is now in the first stage of drafting. More information will likely be available in mid-November.
11/24/20 UPDATE: Now that the election process is over things are moving forward. State Representative David Kerr for Louisa County is in the process of drafting a new bill based of element from the South Dakota and Wyoming OHV Highway Bills. Representative Kerr will also be in contact with State Senators to possibly expedite the bill through the State Senate concurrently. More updates will follow as they are available.
2/10/21 UPDATE: The first draft has been reviewed, modified and sent back to the House of Representatives for final draft approval. From there it will go to sub committee. When the final draft is complete we will share the draft number for you to contact your local representatives. More updates will follows as it progresses.